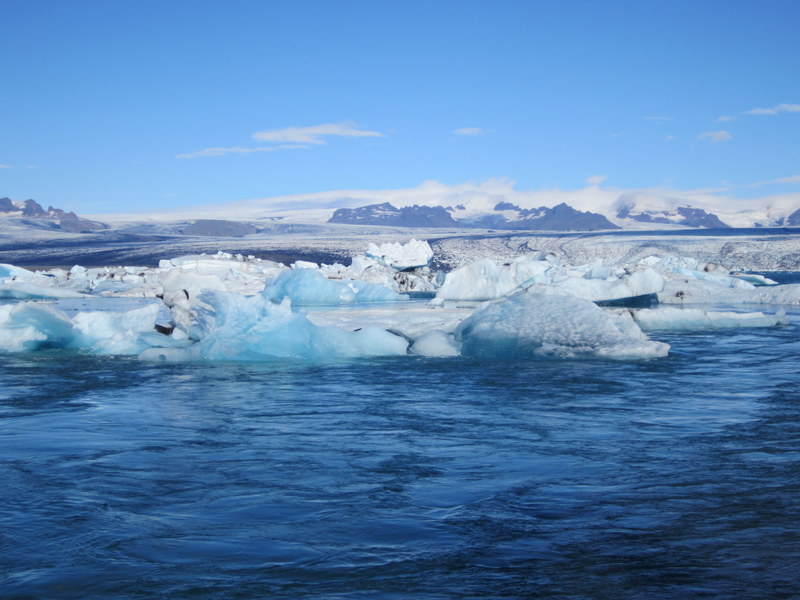 After leaving Husavik, we decided to stay off the Ring Road and continue following the coastline.  We had such great luck in Husavik, we thought we may find another very interesting sea town.  Nice thought!

As you follow one of the roads that outlines the island heading towards the Northeast, you will begin to see metal-type scarecrows dressed in strange attire in the fields.  My first thought was “Children of the Corn” .. DO NOT STOP, just keep driving.  Through out this entire region we kept passing these “scarecrows”. We had decided that we were going to stop in every single village along the coast as we needed to slow down otherwise we were going to arrive in Reykjavik a couple days too early.  Well, I can say without hesitation that decision was thrown out of the window.  It was just a little creepy.  As we continued along the Northern Coastline, we hit patches of miles and miles of nothing but empty uninhabited land.  As I was looking out at the landscape from the car, the only thought crossing my mind was “please do not have a flat tire.”  It would have been about a 30 mile walk to anywhere where someone could help and in the two hours that we had been driving through the Northeastern tip of Iceland, we had seen perhaps one other car.

As we were passing through  Raufarhöfn (a small village with about 200 inhabitants  located on the northeastern tip of the Melrakkasletta Peninsula) we came across another strange sculpture.  I am now calling it a sculpture because this one was  metal like the rest but it was of a fairly buxom woman behind a stove.  I just had to know about these scarecrows/sculptures, so we stopped into a lovely home/cafe and asked the proprietress.  We are so uneducated.  As it turned out, these sculptures were the art of a resident of Kopasker.  Now it makes sense why there were so many in that particular town.  Her sculptures are littered throughout different parts of Iceland and some of them are quite politically cutting in nature.  For example, the sculpture of the woman behind the stove was made to make fun of someone in the Icelandic parliament who had said that a woman’s role in life was to be at home behind the stove providing for her family.  See what you can learn when you ask questions.

We were now heading down the East coast and briefly hooked up with the Ring Road then detoured towards Seyðisfjörður   Seyðisfjörður is surrounded by mountains on all sides with most prominent Mt. Bjólfur to the West (1085m) and Strandartindur (1010m) to the East.  This town is well known because this is the ferry portal to the Faroe Islands.  We had a coffee at a lovely inn with very helpful owners.  Had it not been so early in the morning, we may have stayed here as it seemed like the village had quite a bit to offer either in the way of hiking, mountain biking, and kayaking. As we continued further south we stayed on the ocean road driving in and out of the fjords and found a small town to park and spend the night.  For the most part, we had been fairly lucky with the weather on the West, Northwest, and North Coasts.  I believe we had only had one full day of light rain in Silfra.  Many days had started with a drizzle but cleared.  As they say in Iceland, “If you don’t like the weather, wait 15 minutes.”  Our luck seemed to run out.  The rain started and stayed with us throughout the whole next day and next and … .  We were passing through a region known for Caribou and steep green hills, but all we could see was rain hitting the windscreen.

We pulled into the small seaside town of Höfn around mid-day.  As with most of the seaside villages, Höfn has a lovely harbour and is predominantly a fishing village.  This little village has created a name for itself as the Lobster capital of Iceland.  We were now on the Ring Road and travelling through much more “tourist” driven areas so there was more infrastructure, restaurants, and yes, of course, people.  We pulled into a rather large campsite which looked like it would be fairly busy later that evening.  Jason had been doing a really good job of finding places to park the mini-van that sheltered us from the wind for cooking, and, more importantly, not butt to head with another camper.  However, at this point, no reason to find a place as we were going to see what the village had to offer.  We found a lovely restaurant with a lot of character called Pakkhus and settled in to escape the rain.  Earlier that afternoon, we had bought some cod and a red fish from a fishing company in the harbour so we had our meals for the next couple of days so this was just to be a small break before heading back to cook.  As we were sitting in the restaurant, we began speaking with a French couple that were just starting their journey.  They were pouring over maps marking each place they were going to stay.  If they only knew:  No plan is the best plan in Iceland.  Of course, having said this, I had just booked a a zodiak tour on Jokulsarlon, a glacial lagoon for the next afternoon. We left after an hour and headed over to the Sundlaug for a nice shower and soak.  When we came out, it was still just pissing rain, and I looked at Jason and said, “Enough, we are going out for a nice dinner.”  About 3 hours later, we walked back into the Pakkhus.  Good timing, too.  I think we arrived around 5:30pm and by 6:15pm there was an 1 1/2 to 2 hour wait for a table.  The French couple were still huddled over a map in the corner.  What else to do on a rainy day?  Oh, heaven.  We split two appetizers that were fairly tiny but so well presented and heavenly tasting.  We then had a lamb loin.  So happy I LOVE lamb.  Pair this with a nice Cabernet and all was right in the world.  We ended our evening with a cappuccino and a black licorice creme brulee.  Little nibs of licorice in bottom.  Worth it!!!

For two days the rain hadn’t stopped, but I woke around 5am and opened the door of our van to a sky lightly littered with clouds.  It was going to be a beautiful sunrise. We continued South down the Ring Road and off to the right we could not only see, but hear waves crashing onto thousands of black pebbles.  We pulled over and walked down to the ocean. Not somewhere I would like to swim.  The water was violently churning, but at the same time, oddly beautiful. It was a beautiful day.  The only one in the past few and the only one to come.  About 20 minutes further South, we saw a lot of cars parked off the side of the road next to a bridge.  This was Jokulsarlon lagoon.  A glacial lagoon that has cut a path out to the ocean.  When icebergs break, they travel down this very fast flowing river into the ocean.  Pictures speak a 1000 words so I will let them speak. The pictures do not show the scale as to how large some of these blocks of ice were.  It also doesn’t show how powerful the ocean is that it would toss these blocks as if they were styrofoam.

“Jökulsárlón is a large glacial lake in southeast Iceland, on the edge of Vatnajokull National Park situated at the head of  the Breidamerkurjökull Glacier.  It developed into a lake after the glacier started receding from the edge of the Atlantic Ocean. The lake has grown since then at varying rates because of melting of the glaciers. It is now 1.5 kilometres (0.93 mi) away from the ocean’s edge and covers an area of about 18 km2 (6.9 sq mi). It recently became the deepest lake in Iceland, at over 248 metres (814 ft). The size of the lake has increased fourfold since the 1970s. It is considered as one of the natural wonders of Iceland.  It has also been the backdrop for various movies, including James Bond’s Die Another Day.”  – Wikipedia

As with many glaciers in the world, Breidamerkurjökull is receding.  Again, we donned some fantastically sexy warm suits to hop on the Zodiak for a tour of the lagoon.  We were so lucky with the weather.  Apparently, they had to cancel the tours the day before, and the previous three days, the visibility was very bad.  Yeah for us. We could only get so close to the Glacier as you have no idea when a piece is going to break off into the water and flip over your zodiak.  No thank you.

Another fantastic Iceland experience.  Going on excursions definitely made the trip more interesting than just driving around.

Only two more nights to go ….