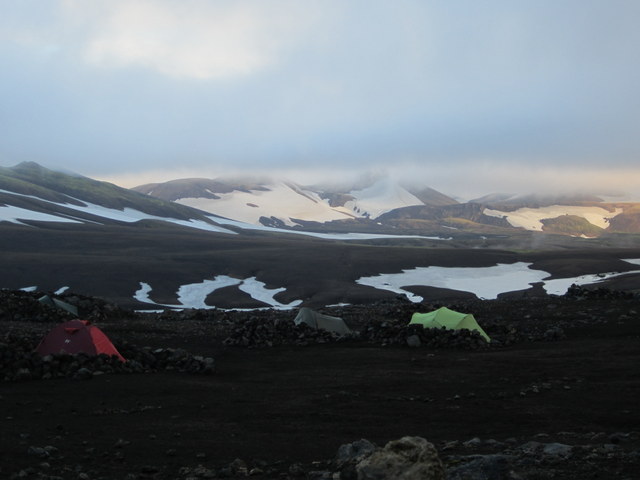 (and, the unmentioned, endless roads of barren nothingness)

Part I – the trek

What they don’t tell you in the books…

My husband and I love travelling to destinations that are more often than not off the beaten track.  Well, one cannot really say that about Iceland these days.  It seems to be in every magazine, TV show, and front page of “destinations where one must travel”.  Our neighbor said it was one of the most beautiful places he had ever been.  So when it came to planning our next big trip, we eagerly started to look at hikes and the far reaches of Iceland.  Our basic itinerary was to fly into Reykjavik spend the day there just resting then take a bus to Landmannalagur to begin a 5 day trek south ending in Skogar.  Then we were going to rent a camper van and drive around the famous ring road with a couple diversions on the way.  We had rented a camper (oh, in hindsight ….), and planned on 12 nights because my husband wanted to head out into the Western Fjords where only 10% of the tourists ever go.  I now know why 🙂

There is a saying, “If plan A doesn’t work, don’t worry there are still 25 letters in the alphabet.”  Well, I think we reached V before our trip was over.

Here is our journey beginning with the 5 day trek which turned into 4.

On our first morning we took a 4 hour bus ride to the beginning of our trek.  The Laugavegur and Fimmvorduhals Trek was chosen one of the “20 Best Hikes in the World” by National Geographic.

We had planned on 5 nights with an average of about 10 miles a day. The total trek is 49 miles.  Everything in Iceland is kilometers so we were thinking an average of 16km per day.  We were not staying in huts because we both decided that we are just too “old” to want to spend the night in a dorm like situation with 30 plus people burping, snoring, farting or basically just on top of each other.  Instead, we decided to bring a tent, all our food and gear from the States.  Here I am, the trainer, but my husband carried about 50lbs on his back.  All of the food, the tent, the cooking stove etc.  I basically had my own clothing, sleeping bag and medical kit.  How this weighed in at 35 odd pounds, I am not entirely sure.  The hike begins in an area called Landmannalaugar which is known as a geothermal wonderland with hot springs and thermal vents coming out of the ground everywhere,the volcanic rock has colorful red and yellow striations, and there are fields of obsidian strewn across the land. Our bus was full of tourists and hikers just like us.  I was a little deflated because I had hoped for a hike without seeing tons of other people.  About an hour into the hike, I realized a lot of the people on the bus were just day hikers and returning that evening.  Once we left the initial hustle and bustle of the first 6km, the road ahead was empty.  We reached the first campsite as it was slowly starting to rain.  I am glad we put our tent up b/c within about an hour you could barely see 10 feet in front of you because of the fog.  As we went to pay for the site, I saw and felt a glimpse of what it would be inside the hut.  Sure, I may of had to put up with a lot of people, but it was so warm and toasty with a nice open cooking area.  Instead, I meandered back to our little tent, head down not looking forward to our prepackaged Mountain House Pasta Primavera.  The next morning was set to be about 12km which is a fairly easy day.  Unfortunately, we were unable to see a lot of the beautiful scenery because it was fairly foggy and drizzly.  We were going to spend the second night at a lake called Alftavatn.  The lake was beautiful; however the wind was fairly stiff and trying to heat water on our little propane stove was going to be a bit trying.  As we are early risers, we had arrived at Alftavatn fairly early in the day so we decided to continue an extra 5km to the next hut in an area called Hyvangils. We ended our day with a lovely frigid river crossing.  Ah, just a teaser for the bigger one the next morning.  Here is a view looking down on lake Alftavatn: Our third day was going to be a 10km trek to Emstrur (it would have been 15k, but we did an additional 5k the day before) where we would spend the night, then hike the 15km to Porsmork the following day and finally end the trek with a 27k day from Porsmork to Skogar.

This third day is when we starting questioning the sanity of our dear friend who said this was one of the most beautiful hikes in the world.  We had been forewarned that this day was going to be a long walk through a desert, but this was understated.  The day started with a frigid river crossing where I pulled my trekking pants up as high as they would go, changed into my beloved Crocs and strapped my shoes around my neck.  OH MY GOD!!!  So cold.  The water only came to mid thigh, but you just have to keep pushing through to the other side.  Once this excitement was over, we literally just walked along a crushed black lava road for hours.  Nothing to see, not really much to admire.  Some hikers had the sense of humor to put up the following sign.  A much needed laugh ensued. We reached Botnar/Emstrur around noon and, as the sun didn’t set til after 9pm, decided to push on.  We were actually looking forward to then breaking up our last day into 2 days so it would not be a 10 or 11 hour day.  The rest of the afternoon was a little prettier, but I really hate to be that “person” that couldn’t see the beauty in this land.  Yes, the scenery did continually change from rocky striations, to green fields with glaciers, to a moon like surface (that did I mention we walked on for hours) to a green valley at the foot of a famous glacier called Eyjafjallajokull.  Pronounce that?  But, it just wasn’t spectacular.  Maybe that is the problem with reading so much about a location that it is hard to reach your expectations.

We spent the night in Porsmork (Thormsork) which was a fantastic campsite with a nice cooking kitchen, BEER, and a resident Artic fox.  Unfortunately, this is where we were given incorrect information about the hut for the next evening.  We were told that the hut between Porsmork and Skogar was not open so we would have to make the entire 23-30km trek in one day.  Not really excited about that after the 25km day we had just finished. Here is my advice for anyone that is considering the Landmannalagur trek.  Instead of one through hike, take a bus to Landmannalaguar and hike for the day to see the geothermal activity and rock formations.  Then don’t spend the night. Take another bus to Porsmork and do the day hike from Porsmork to Skogar.  By far this was the most beautiful and torturous day.  It begins with a 900m ascent, can you see the trail?  That was just the beginning… Followed by a trek over between two craters on the famous Fimmvorduhals volcano.  This was the volcano that erupted in 2010.  There is a rescue hut and a camper hut at the top.  We reached the camper hut just as a torrential rainfall began.  I am happy to say, we were misinformed, and the hut was open.  We ran inside to shelter from the downpour for about 15 minutes.  Now, although we were shattered at the end of the day from the hike, I am glad that we continued to the end because sleeping on top of a crater would have led to quite a frigid night.

Once you reach the apex, you have a magnificent view of the ocean below and then upon descent come upon a massive crevasse, with amazing waterfalls, that had cut its’ way from the mountain to the valley floor ending at the beautiful waterfall named “Skogafoss”- a foss is a waterfall.  In a way it is a pity that is was our last day because we were both tired and neither one of our knees hold up well on the downhill.  We actually got to a point where we didn’t want to stop for “another” waterfall. We pitched our tent at Skogar went into the restaurant for a well deserved beer or two or three before catching the bus back to Reykjavik the next morning.

I feel like such the downer, but both of us felt that this was not one of the most beautiful hikes we have taken in our lives.  Perhaps had we come in July when the mountains were greener so the color variation was more prominent then our breaths would have been taken away.

Back on a bus to Reykjavik to begin the next part of our adventure ….

A lot of people associate muscle soreness (DOMS – Delayed Onset Muscle Soreness) the next day as a sign of a good workout. But…