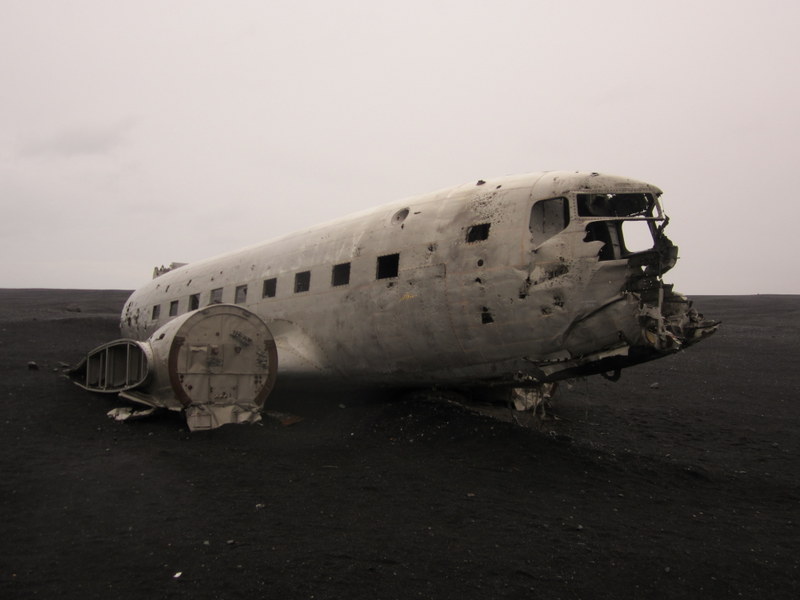 After a beautiful zodiac tour of the glacial lagoon, we continued along the ring road towards Vik.  We ended up stopping at a campsite about 10 minutes from Skaftafell National Park.  Initially we had driven up to the park, but the campsite was fairly full, and we thought perhaps a smaller campsite would be quieter.  We back tracked to Svínafelli and found a huge open field with barely any campers.  We pulled into the far side of the field giving any other vans or tents a very wide berth.  Svínafelli had a huge communal cooking area so we were able to use one of their burners to cook a nice meal.  Off to bed early as there really was not much else to do.  Only to be awakened at about 10:00pm by someone yelling outside our camper trying to help a huge motor home reverse behind us.  Really!  One of the things that I really like about my husband is he tries to find places where we wouldn’t be crowded in.  I slowly went back to sleep with the assumption that the campground had filled up at night.  Much to my chagrin in the morning, the huge field was still only 1/2 full, but for some reason this motor home driver felt the need to pull right up our bum.  As an early riser, I felt no guilt shutting our sliding door with alarming alacrity at 5:30am.  Oh, oops!

Wish I had a picture to show the empty field and our squished vehicles.

We continued our drive towards Vik which is known for its’ beautiful cliffs, black sand beaches, and cliff dwelling birds.  The puffins had already departed for the season so we wouldn’t see them, but the Icelandic cliffs are full of different varieties of birds.  Interesting Puffin fact: They have a gland, called the supraorbital gland,  which removes salt from their bloodstream which enables them to survive without fresh water for months on end.  Because Iceland is circled by the food rich currents of not only that Atlantic but also Arctic and polar waters, it is teeming with food, and the rocky coast and sea cliffs are the breeding grounds for 23 species of Atlantic Birds.   As I was writing this, I found a great article on the vanishing colonies of the Icelandic seabirds from National Geographic.  The link is at the end of this article.

It was fairly impressive to watch the Northern Fulmars ride the thermals.  They sort of look like seagulls although any ornithologist is probably shaking their head in complete disagreement with me now.  Sorry to offend.  Oh, just one more interesting fact…  There are signs posted all around the area that caution to watch for young Fulmar chicks on the tarmac roads and to drive slowly.  Apparently, the chicks mistake the tarmac road for water and try to land on it.  If they aren’t run over, eventually they will move off the road and try to fly again.

The area around Vik was very scenic and the rock formations unique. After a nice lunch in a cafe, we decided to continue south towards the path that would lead us towards the wreckage of a US Navy DC-3 plane that was forced to land on Sólheimasandur’s black sand beach in 1973.  As we drove along, we saw throngs of people walking along a path towards the beach.  It was still a fairly nice day so apparently we all had the same idea.  After about 20 seconds of discussion, we decided it was just not that important because we believed we wouldn’t be able to get a clear photo of the plane with tons of people hovering around it.

We continued south and passed Skogafoss.  Yippeee.  A complete circle around the island.  This is where we hiked out about 2 weeks earlier.  We continued just past Seljalandsfoss falls.  These are some of the most photographed falls in Iceland as you can walk behind them.  We found a great campsite about 1/4 mile down the road from the falls.  Upon touring the area, Jason found some other falls that you could walk through a crevasse in the rocks and come across another set of falls where you could be soaked by the mist and deafened by the crashing sound of water hitting rocks. Quite the lucky find.    The skies don’t show it in the these photos, but the heavens were about to unleash a torrential rain.  Jason found a site away from the main camping with a lovely picnic bench and access to these falls was about a 30 second walk.  It pissed rain and had we had heavy winds all night.  We decided we would like to see the falls without many people so woke to a light misting around 6am.  We had the falls almost completely to ourselves.  It was nice to walk behind Seljalandsfoss with perhaps only 2 other people in sight. Above are two of the photos that we took.  Pretty but not blow your mind.  Below is a very retouched photo from Wikipedia.  The difference in a natural picture and this one is amazing.  Of course, it is fairly obvious, you are not going to see the picture below with your natural eye.  However, mission accomplished.  We did see these falls in complete peace and quite.  Not a bus in sight. We decided to give the hike to the airplane ruins another go.  By the time we reached the parking lot, the mist had become a light rain, but there was only one other car in the lot.  The hike out the plane is about 4km along a fine black sand path.  You used to be able to drive right up to the crash, but the farmer who owns the land finally said enough.  All that is left is a hollowed out fuselage, but nevertheless, it is quite an impressive sight.  The entire crew survived the crash. Another 4km walk back to our car, and we both realized we needed new rain gear.  Drenched 🙂

Following the Ring Road south, we decided to drive towards the Blue Lagoon.  The Blue Lagoon is a geothermal spa located in a lava field in Grindavík on the Reykjanes Peninsula.  It is one of the most visited attractions in Iceland.   Upon arrival, one could see why.  It was a very manicured Europeanesque spa with a wade up bar, nice fuzzy robes, and fairly posh restaurant.  The Lagoon is artificially made and is fed by the water output of the nearby geothermal power plant.  “Superheated water is vented from the ground near a lava flow and used to run turbines that generate electricity. After going through the turbines, the steam and hot water passes through a heat exchanger to provide heat for a municipal water heating system. Then the water is fed into the lagoon for recreational and medicinal users to bathe in.” – Wikipedia.  Geothermal hot springs have been thought to cure many maladies over the centuries including skin conditions like psoriasis.

We were just passing through and didn’t pay to go inside, but I could certainly see the attraction; however, the entire island is geothermal so anyone would have numerous opportunities to go to hot springs in virtually all of the cities.  We were heading toward the outskirts of Reykjavík for our last night.  Unfortunately the campsite on our topographical map didn’t exist so we ended up at the main campsite in town.  Jason and I felt like we should have been parents to most of the teens that were staying at the campsite.  It was refreshing to see the diversity of young travelers.  The overall set up of the camp was very impressive, but not my cup of tea just purely due to the size.

Our last morning, we went to Sandholt Bakery on the main tourist street in Reykjavik for a sandwich and an Americano and then off to the airport.  The best bakery on the island with the most amazing bread that you just wanted to savor every bite and paired with a coffee from heaven.  Not a bad way to end our trip.

Iceland: The Ring Road and beyond … far far beyond

Iceland’s Westfjords Photo (Credit: Katie Hammel) Kukucamper, Silfra, and the Westfjords As one adventure came to a close another one was beginning… One of…