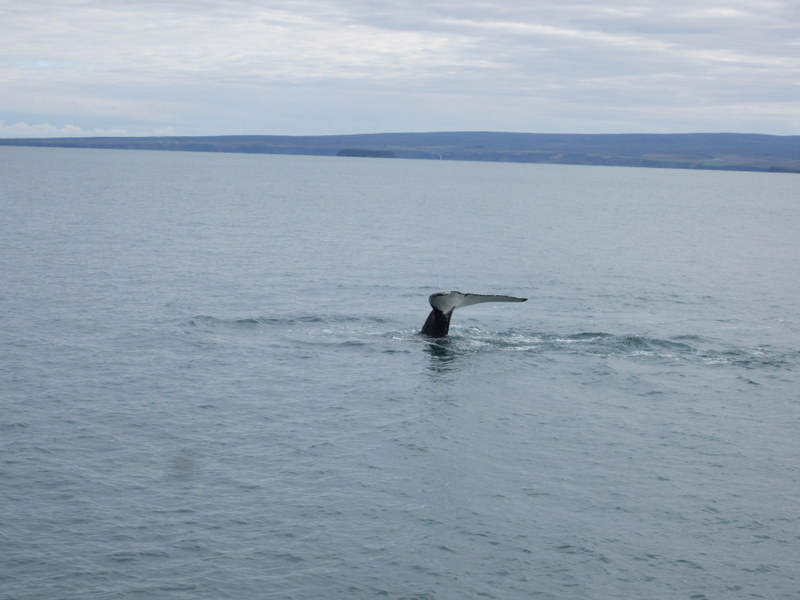 After leaving the West Fjords, we decided we would rejoin the Ring Road and then take small diversions from there.  As I mentioned earlier, a lot of the small towns are really not meant for tourism.  They are functioning, working towns and therefore, no real reason to stop. We came to a junction in the road and decided to head North with the hopes of a clear night so perhaps another viewing of the Northern Lights.  We stopped at a small fishing town on the Northern Coast, called Siglufjörður . The campsite was directly behind two restaurants (that were closed for dinner because season was over) and overlooking the harbour.  It had been raining that day and was cold and windy.  It has been a few days since I began writing our story, and I must tell you that, in hindsight, I truly believe that I would have enjoyed Iceland much more had we been in a bigger camper.  We didn’t know at the time what we were getting into; however, we couldn’t just pull off the side of the road and cook because that entailed finding somewhere where the wind wasn’t blowing a gale so we could open the tail gate of the camper to pull out the cutting board to cook.  When we were in Argentina, we encountered the same winds, and I wonder if being either so far South or North has something to do with the winds.  Unfortunately, it wasn’t fun cooking in the cold and then hopping in the front seat to eat our meal.  For an extra $70.00 a day, we could have had a camper that you could stand up in the back with a table inside, a propane stove, cooler, and sink.  It would have made a world of difference.  We could have pulled of anywhere because the wind wouldn’t have mattered, and we could have had the side door open and enjoyed the view.  Oh, hindsight.  I know why it is 20/20.  I will just chalk this up as the learner trip for New Zealand in a year or two.  Bigger, more comfortable = better attitude from Nicola.

*My advice to young couples before getting married.  1.  Share a bathroom for an extended period of time.  2.  Do a multi-day trip sharing a small tent.  3.  Live in an over-sized mini-van for 13 days with one sliding door.  OR do the last two on the same vacation.  Cannot believe we have been going strong for 10 years.

Once we parked in the camping spot, we walked over to the Siglo Hotel for a beer and a coffee.  I couldn’t be bothered to cook quite yet.  After about an hour, I actually went to the front desk and inquired as to the nightly rate.  Jason looked at me, shook his head, smiled and asked if he needed to go get our bags.  But, alas, nope.  I guess I wasn’t that annoyed with our van yet.  Out into the evening air for sauteed vegetables and wolfish.  The ugliest fish in the world, but wow, what flavour.

The next day we planned on heading south, travelling through Akureyri which is nicknamed the second capital of Iceland, and then continuing to Lake Myvatn.  I do wish we had spent more time in Akureyri because it really did look quite lovely.  Instead, we did a small pass through to the local fish store for some fresh Char, Catfish, and Trout.  Back on the road towards Lake Mývatn which is a shallow lake located in a very active volcanic area in Norther Iceland.  Due to the excessive nutrients in the water, fauna and aquatic plants are abundant. I was really looking forward to this part of our trip.  Jason had read a blog prior to our trip, and the author had written how this area was her favourite part of Iceland and how she could have spent three days discovering the area.  We drove around the lake twice and pulled into the campsite and sat down at a picnic table for lunch.  We were perplexed.  What could you do for three days here?  Hike to the crater, yes.  Rent a boat and paddle in the lake, yes.  Walk around the volcanic formations, yes.  For three days, NO.

Diversity in beliefs and what one finds resplendent is a wonderful thing in this world.  One persons trash is another’s treasure.  As I am sure many people have, she found this area magnificent.  We didn’t have the same view of the lake and volcanic area surrounding it. So, sit around a lake or head into uncharted territory.  We had both decided to miss Husavik because neither one of us thought we cared that much about going whale watching.  However, at this point, we were realizing that we did like the smaller fishing villages so why not give it a try.

We were in for a treat.  Husavik is known as one of the best whale watching sights in Iceland.  The harbour was full of old oak boats.  There was a small fish and chip vendor and the town had a wonderful feeling.  Because the town catered more to tourists, it had a couple nice restaurants all with nautical flair. Husavik is also the location of the Exploration Museum.  We were unable to go due to the time, but I do feel we missed out.  It is dedicated to the the history of human exploration.  The main exhibition room features photographs and artifacts from the Apollo Astronaut Training which occurred near Husavik in 1965-1967.  NASA had long ago decided Iceland had the closest topography to the moon.  See, desolate wasteland.

At nine in the morning, we headed down to the dock to put on our warm, heavy flotation suits. Quite becoming??  Maybe not so much, but that is okay as it kept you nice and toasty on the Icelandic waters.

The weather was spectacular and the ocean like glass.  We headed out into the bay and after about 45 minutes, the captain bee-lined towards the small zodiac that was circling an area.  Two humpbacks.  I was speechless.  These magnificent creatures SO close.  I had never really thought I would enjoy sitting on a boat looking for a needle in a haystack, but to have them within 20 feet, I can’t explain.  If you have the opportunity, do it. One of the brighter days on this journey and completely unplanned.  As I had said earlier, if  plan A doesn’t work, there are 25 more letters in the alphabet.   I think we were on about M at this point.  Must have been serendipity.  M for Marvelous, Magnificent, Masterpieces of nature.

Off to the Northeast and East Coast …..

Crunches Will Not Reduce Belly Fat

You can’t spot-reduce fat. Working the muscle beneath a layer of fat won’t do any good to reduce the fat in that area. Unfortunately,…