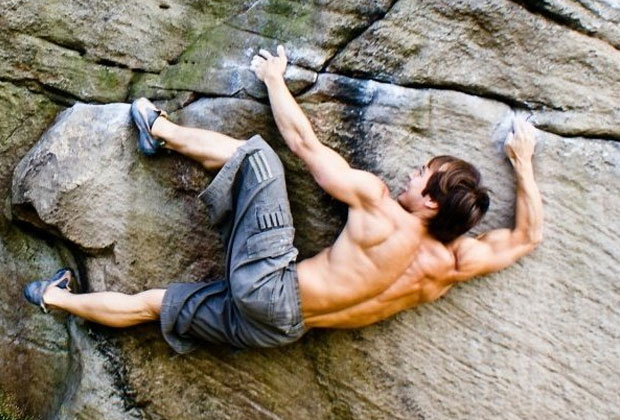 When you climb, the most common type of motion is a pulling motion.  The main muscles used in these motions is called the “agonist”.  Two examples of the dominant muscles that exert force in a pulling motion are your back and biceps  Overtime constant use of these muscles will make them much stronger than their opposing muscles.  The antagonist muscle groups to those that PULL, would be those that push.  Climbers tend to have strong pulling muscles, but much weaker pushing muscles.

It is important to train the antagonist muscles on days when you are not climbing because both the PUSH and PULL muscles complement each other.  If one is much stronger than the other, muscular imbalances occur which in turn usually lead to injuries such as tendinitis, muscle tears or overall instability.

So what can you do to train the push muscles?  Think about it.  A pull up works your back so the opposite movement would be a push up.  Push ups focus on your chest, triceps, shoulders and core.  At Sender, we have a variety of ways for you to train your antagonist muscles which also train shoulder stability.  Try push-ups on the TRX, Bosu ball or with a medicine ball.  Make sure you have correct form with your shoulders directly over your wrists and keep your stomach tight and do not allow an arch in your lower back.

Make sure to listen to your body.  If you feel a tweak or sharp pain, then stop.  You can readjust your form or change the angle and try again, but you should feel a good burn.  If not, stop and give the muscle a rest and try on another day.  Remember your pulling muscles have had time to develop with all the on wall climbing.  It is going to take time for your “antagonist” muscles to catch up.